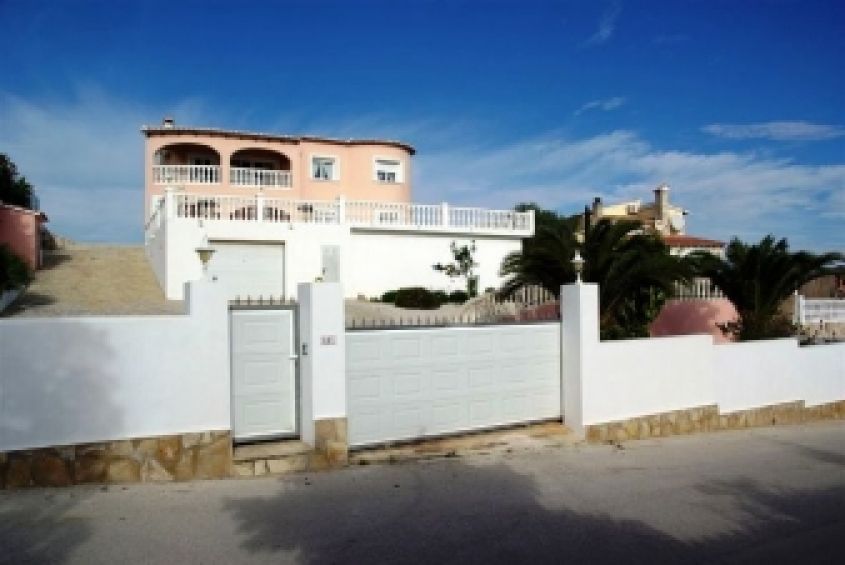 Spacious villa with privileged and unbeatable views to the sea and a large private pool. The property has a large plot of 1020 m2, 4 bedrooms and 2 bathrooms. This fantastic villa also counts on a kitchen, living room and 2 terraces where it is possible to enjoy the warm climate of Costa Blanca during the whole year. Sold fully furnished.

The property is in a very private area in Benissa, a small town in Spain in the province of Alicante witch has grown to over 9,500 inhabitants, 275 m above sea level, and one of the oldest towns on the Costa Blanca. It has 4 km of coastline linking the towns of Moraira and Calp. The scenery of the area includes cliff tops, rocky coves, sandy beaches and tiny bays along the Benissa Costa. The territory of Benissa also contains terraced vineyards, mountains and palm trees.
It has over 4 kilometres of coast which has proportioned it with a wide range of activities like quiet coves hidden among pine trees or beaches found after climbing done a small cliff. Some of these hot spots are; el Abogat, el Baladrar, Els Pinets or La Fustera. Look for them!
Main sights
The medieval town centre has been largely preserved with its town square, narrow streets, churches. Ironwork balconies and heraldic shields decorate the historic buildings. The Palace of Torres-Orduña is open to the public as a cultural centre and library. Benissa also has a strong Catholic tradition with a Franciscan seminary that has educated many Franciscans followers throughout Spain and a large Neo-Gothic church, the "Catedral de la Marina".
Transportation
Travel to Benissa is easily made from Alicante or Valencia, through the highway A-7 or the N332. The closest airport is the Alicante airport, located 70 km to the south-west. The closest RENFE (Spanish mainline) railway station is in Alicante. There is an Alicante TRAM station in Benissa, connected to the network via Benidorm. Every town and village, no matter how far or close they are to each other has a special dish for the hungry to try and Benissa is no exception. here the specialty, being true to where it is located, is a stew made with octopus which should be reserved before hand. And if that does not convince you, one of the rice dishes will definitely fill your tummy, accompanied by a good local wine.
We can help you find your best choice of real estate for you